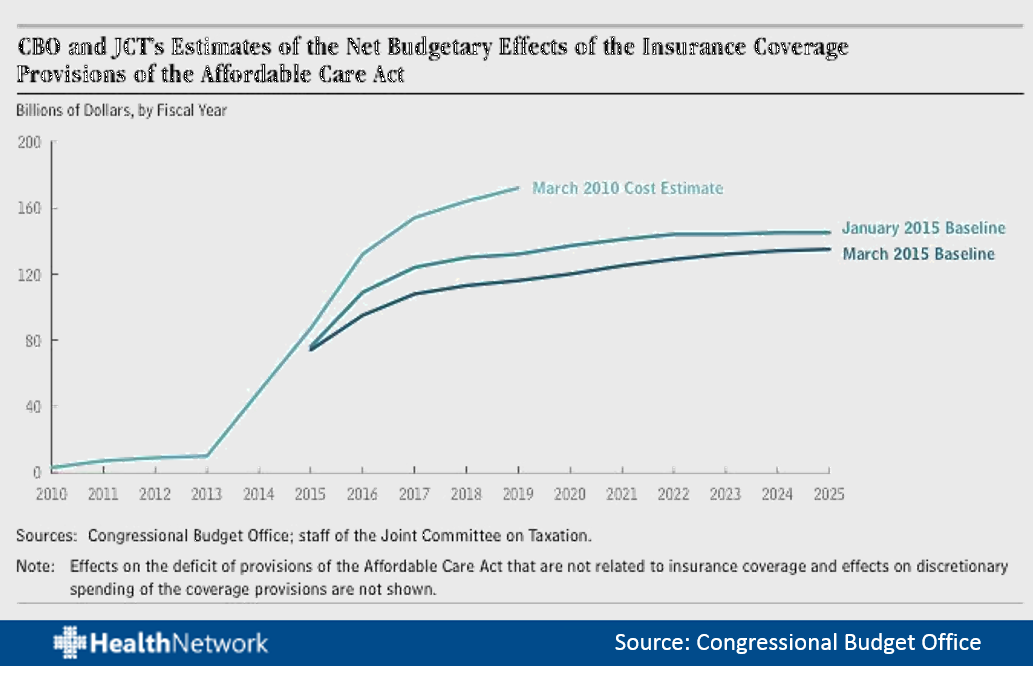 According to new cost estimates developed by the Congressional Budget Office, advance premium tax credits will cost taxpayers about 20 percent less than initially projected. Subsidies, which make health insurance affordable for millions of Americans, have been the subject of debate recently as the Supreme Court considers their implementation within the context of the Affordable Care Act. Despite the legal challenges, subsidies remain an integral part of the ACA. Opponents of the healthcare law continue to claim that the costs associated with these tax credits outweighs their benefits. However, the price tag on the ACA continues to go down.

Reducing the Cost of Subsidies

Republicans who opposed the Affordable Care Act argued before the law was even passed that “the Congressional Budget Office was sharply underestimating the amount of money Obamacare spends.” One of the major arguments of those against the ACA centers on cost. How much would the new law cost taxpayers? Is it sustainable over the next decade? With new evidence in the form of actual enrollment numbers and nationwide healthcare spending, the CBO now projects that the ACA will cost about $600 billion less overall than they initially thought back in 2010.

Subsidies should cost American taxpayers about $849 billion over the next 10 years according to the CBO. The original estimate topped $1 trillion. Also known as advance premium tax credits, federal subsidies enable low- and medium-income Americans to pay for health insurance by reducing their monthly premiums. A recent report by the Health and Human Services Department reveals that subsidies reduce premium costs by about $1 billion per month nationwide.

Why the Price Keeps Dropping

Several factors affect the overall cost of the Affordable Care Act. For starters, the CBO initially expected that more consumers would sign up for health insurance using state or federal exchanges. They’ve since reduced their estimate to 24 million by 2025, which is one million less than originally projected. With fewer people to cover, the government doesn’t have to spend as much on the program itself or individual subsidies. Medicaid enrollment is also lower. States have the option to expand Medicaid under the ACA, but not every state is participating in the expansion. To date, there are still 17 states refusing to consider Medicaid expansion at all. Lower participation in programs like Medicaid also frees up the federal budget and reduces the burden on taxpayers.

Healthcare spending has also decreased since 2003 according to the Centers for Medicare and Medicaid Services. Until then, healthcare costs rose steadily and quickly. In the last decade, the percentage of annual spending has decreased from 8.6 percent in 2003 to just 3.6 percent in 2013. The decline in spending indicates that Americans are taking a more conservative approach to their healthcare, and health economists suspect that the recession plays a large role in this slowdown.

With fewer people enrolled than expected, a slower increase in annual healthcare spending and limited expansion of Medicaid, the government will not need to spend as much to support the Affordable Care Act. Still, it’s important to note that this law requires significant cost. New government programs typically depend on taxpayer support, and the ACA is no different. Those who participate in the system help to expand its reach and effectiveness in the long run.